In the 18th and 19th centuries, most firefighting organizations, even in the largest cities, were not public, tax-funded agencies.  They were all volunteer, private organizations, very similar to a fraternal club.  They voted to admit new members (or not), raised funds to purchase equipment and build a firehouse, selected a uniform and a name, wrote bylaws, drilled, elected a foreman, paraded, held balls, and fought fires.  Each company generally had a single small firehouse to store the apparatus and a city would have many independent companies.  Some received government support to purchase equipment or to build their firehouse. 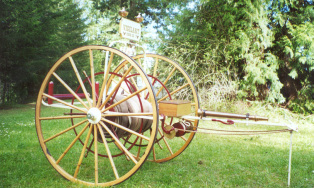 A piece of apparatus that I have had for many years is a 19th century hand drawn hose cart.  When I purchased it the sign that identified what fire company it belonged to was missing.  No provenance was available, so I was free to pick a name.  Fire company names of the era were patriotic (Eagle, Union, Washington, Franklin), water-based (Torrent, Cataract), or desireable qualitites of firemen (Vigilant, Goodwill, Protection).  Some of these names are still in active use.  Shortly after picking the name and making the new sign, an original parade belt with the name showed up a a local antique show. 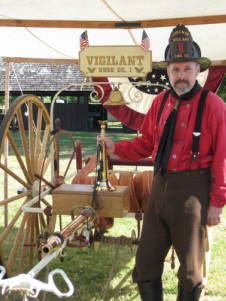 One way I educate people about the early days of firefighting is by
participating in local Civil War reenactments with the Northwest Civil War
Council, which holds several reenactments each year in Oregon and
includes a large civilian group.  One feature of reenactments on the west coast
is that most of the reenactors camp at the site for the entire event with period
correct tents and furnishings.  The reenactments are open to the public and I usually have a constant stream of curious visitors.  I portray the foreman of the Vigilant Fire
Company complete with hose cart and period uniform.  Other civilian reenactors have been gracious enough to join the volunteer company and don their uniforms for the occasional parade.  Volunteer fireman were exempt from the draft during the
civil war.  Here the hose cart has a length of period correct riveted leather fire hose.

The company also recently appeared at the 2013 Newberg Old Fashioned festival.  A photo of me and the hose cart from this event was published in the first quarter SPAAMFAA national magazine Enjine-Enjine.
As a demonstration at the Civil War reenactments I construct leather fire hose, as was typical for the period.  Riveted leather fire hose was used from around 1800 to about 1870.