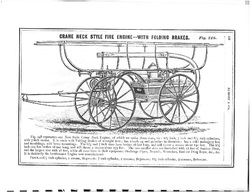 I found my project through a contact on Ebay.  The gentleman at one time had a
large private museum devoted to handtubs and other firefighting paraphenalia of
the period.  Most of his collection was sold at auction but he retained several
restored and unrestored handtubs.  After the auction he listed some items on
Ebay, including a larger beautifully restored handtub.  I contacted him to see
what else he had available and after a few photos and some research I realized I
had found my project.  In New Hampshire -  I live in Oregon.   The
manufacturer is unknown for sure although it is probably a Rumsey, a large
handtub manufacturer of the time and one of several fire engine manufactuerers  located in Seneca Falls, New York. Their niche was small to medium size,  economically priced pumpers aimed at smaller towns.  It was built late in the  handtub era,  probably in the 1880's. It is a side stroke, crane neck style,  unusual for Rumsey but a common style for other manufacturers. Class B size at  6-1/2" with fixed brakes , requiring up to 20 firemen to operate.  Its' history  is unknown at this point and will require research to determine its original  owner.  The only clue is a tag one one of the parts that says "Old NY tub" When completed this will join the Vigilant Fire Company.  Along with the major pieces a box of smaller parts was included, many of which are tagged as to their purpose or location.

If you have never called a moving company and asked if they can move an  antique, crumbling, heavy, rolling wagon-like thing cross country; well you can probably guess what they say.  So, how to get it home?  Not so hard really.  Fly to Boston, take a cab to the Home Depot. "Are you filming a reality show?", says the cab driver, because I guess not a lot of people go from the airport to Home Depot with their luggage.  Anyway, he drops us off at the front door of the Home Depot, making a great show of unloading the luggage.  And we go inside to complete the paper work for the rental truck we have reserved.  After we get the keys we put our luggage in the truck and go back into the Home Depot for a couple of large planks, tie-downs, rope, blocking, and a case of bottled water and head for New Hampshire.  The next day we arrive to pick up our new toy.  We load it into the truck without much trouble and tie it all down.  The large cast iron pump was removed from the handtub several years ago because it was falling through the rotting bottom.  After a quick tour of other remaining handtubs in the museum we were on our way.  Every stop we would check to see if it was still in one piece; or at least no more pieces than we started with!